Inauguration of the project for supplying ‘Solar Home Systems’ in Rwanda 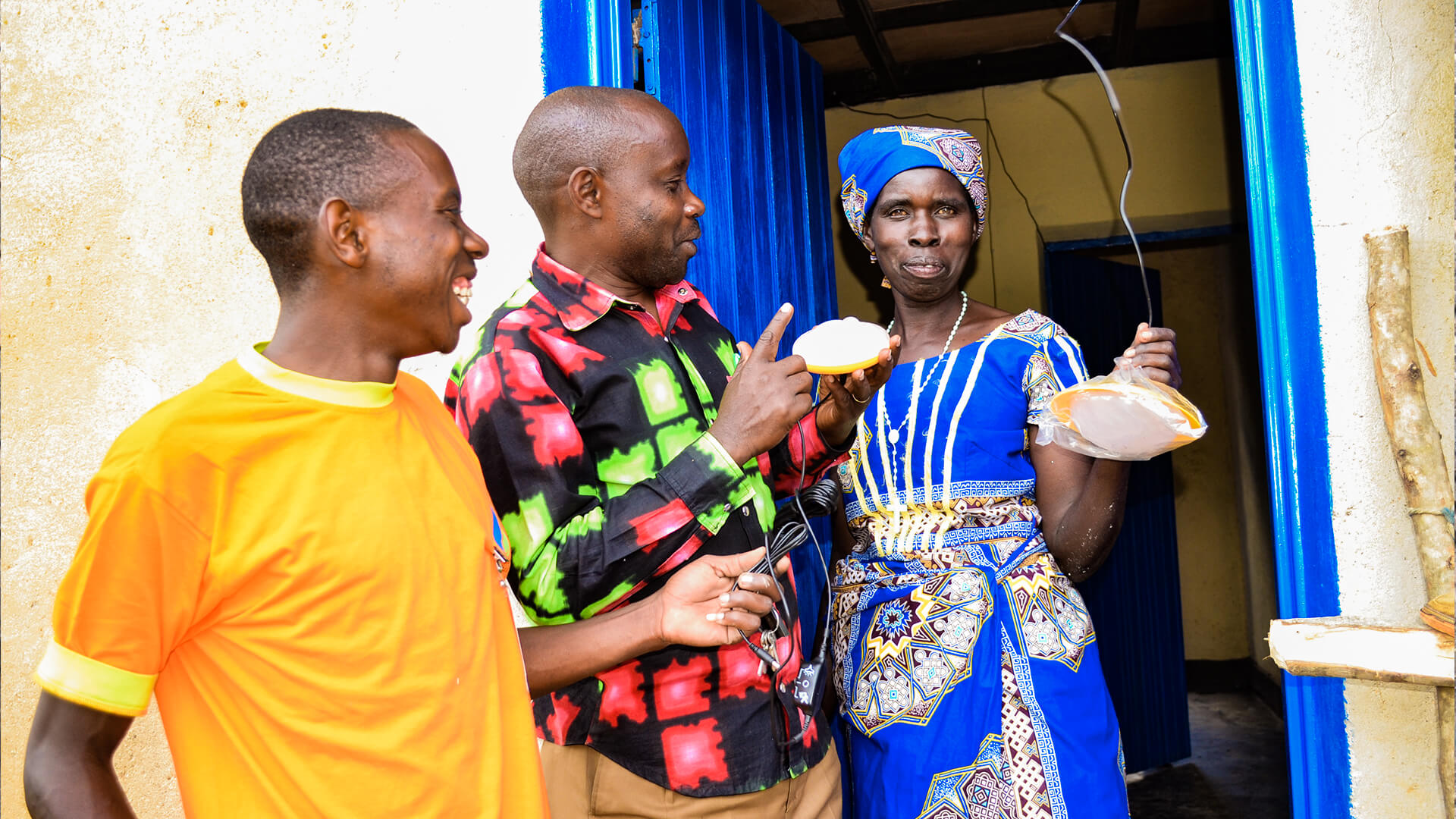 “Over 7 million people in Rwanda still have no electricity”

To mark the inauguration OF the project for supplying ‘Solar Home Systems’ in Off-grid areas by Hon mayor of Muhanga district Ms Beatrice Uwamariya and UEM Executive Secretary for Africa(1), Rev Dr John Wesley Kabango, a small ceremony was held at Kivumu village, on the 2nd of August 2018. About two hundred villagers, government officials and representatives from the two project implementing Churches as well as some staff members of RDIS organisation and Ignite Power Rwanda company Ltd attended this colourful event, which started at 10:00 in the morning and ended at about 14:00 hrs.

The Anglican Church of Rwanda (EAR), dioceses of Butare, Cyangugu, Kigeme and Shyogwe via the Rural Development Inter-diocesan Service (RDIS(2)) in collaboration Presbyterian Church of Rwanda (EPR) and One for the Climate are jointly implementing a pilot phase of a Project for Supplying ‘Solar Home Systems’ in Off-grid areas in their respective Church areas(3). The project has started with a pilot phase, whereby 200 households are indirectly going to get a microcredit(4) to enable them to get Solar Home System kits installed in their homes.

Speaking at the ceremony, the mayor of Muhanga district said: “Electricity accelerates development. It is very good that through this project, the people of this district will get electricity, which will definitely open many possibilities for all community members.”

She added that, she appreciates the project very much, because it complements government initiatives such as the ‘One Laptop per Child (OLPC) program’. This successful ongoing program seeks to expand the use of computer technology, especially for school children, from the richer and industrial areas of the world, to the poorer and more rural areas. The mayor said, having Solar Home Systems that can charge radios and mobile phones, is a good starting point.

In her short speech, the mayor asked the project implementers and sponsors to supply even larger Solar PV systems so as to contribute more to the government’s vision to reach 70% electrification rate by 2020. Indeed, over 7 million people in Rwanda still have no electricity. Based on government data (Energy Group Report Aug/2017), Rwanda’s national electrification rate has reached 41% (11% off-grid, 30% on-grid), whereby 9% are in rural areas and 72% are in urban areas. Experts say, among many issues is the limited financing available for off-grid companies – a problem which led to the initiation of this project.

With the support from the United Evangelical Mission (UEM) in Germany, the two UEM member Churches in Rwanda are in essence implementing an environmental protection project by investing in renewable energy sources (Solar Home Systems) in cooperation with two German partners One-for-the-Climate (OFTC) and Büro Ö-quadrat (Ö2), whereby the invested capital will have to be paid back. This project is therefore demonstrating one of the possible ways of tackling the issue of limited financing for renewable energy projects.

The two German partners were tasked to develop the business plan, select the SHS and conduct the financial calculations. At this brief inauguration ceremony, the local leader of the area, the Executive Secretary of Cyeza sector, Ms Valerie Mukamutari invited the officials and guests including community members from the area, church representatives, RDIS staff members and Ignite personnel to the event. In her short speech she said: “I am so happy to get this project in my area”. However, she was concerned, whether this SHS kits would be able to run larger equipments in small saloons.

The Executive Secretary of RDIS organisation, Mr Viateur Ntarindwa moderated the ceremony and he introduced the SHS project to invited guests. He said; this is a joint project by the Presbyterian Church of Rwanda and the Anglican Church of Rwanda.
The president of the Presbyterian Church of Rwanda, Rev Dr Pascal Bataringaya was represented at this ceremony by Pastor Celestine Nsengimana, who thanked all stakeholders of the project, particularly the two churches and UEM. He added that, his church is currently preparing for a Crusade in Muhanga under the slogan; “Good spirit in good life”. He added; “We cannot pretend to have good spirit, while we are still using kerosene for lighting, which is known to adversely affect our health and our environment”. In brief, the pastor commended the project by mentioning a number of benefits, which the beneficiaries are going to get.

On the other side, the Bishop of the Anglican Church in Rwanda (Shyogwe diocese) and UEM representative, Rev Dr Jered Kalimba was represented to this ceremony by Pastor Joseph Sehorana, who utilised the opportunity also to thank the sponsors of the project. He asked the UEM official who attended the ceremony, Rev Dr John Wesley Kabango to relay many greetings and many thanks to the people in Germany for facilitating this wonderful project. He also thanked RDIS organisation and EPR Church for working hard through all stages of the preparation of this project until now during the inauguration day. He said, “This project is in line with our Vision Statement: A Holy Soul in a Healthy Body”. It is because of this vision, mostly when establishing a Parish; they would start by building a school, before building a temple.

Addressing the community members at the ceremony, Rev Dr John Wesley Kabango started by briefly introducing how UEM works and that in his role as the Executive Secretary for Africa, he is working for 7 different countries in the African region. He also acknowledged the good work done by the staff members of RDIS organisation. He also thanked the Hon mayor of Muhanga district and the Executive Secretary of Cyeza Sector for attending this important event.

As other speakers had said before, Rev Kabango also appreciated very much the close cooperation between the government and churches in community development work, as they complement each other. He said:”I am happy as a Rwandese to be here today. When I go back to Europe, I will tell them this good news of launching this projection in the presence of Church and Government representatives.”

He said, the project application was prepared and presented to UEM by EPR Church and RDIS organisation. Later, UEM accepted to fund this pilot phase. He added that it is now up to the implementers of the project. If they manage the project properly and it succeeds, it may be scaled up not only here in Rwanda, but also in other UEM member churches in other countries.

The villagers were explained how the project works from being selected to the payment procedures: The selected SHS users are required to sign a special contract and will make a down payment amounting to 20% of the micro-credit (21,200 RWF, whereby 16,000 RWF is a guarantee fund and 5,200RWF is a payment for the first month) and 23 monthly payments of 5,200 RWF to cover costs and to repay the loan.
The Solar Home System (SHS), which was chosen for this project is Sun King Home 120 for being most suitable for the pilot project in Rwanda. The product includes a lithium ion battery, 4 LED-lamps, a USB port for charging mobile phones, a digital radio, connection cables and a 12 Watt PV-Panel.

At the end of the short meeting, the villagers of Kivumu were given an opportunity to ask questions. Many villagers expressed their gratitude for the project. They said, they accept the monthly payments, but they would kindly ask for a reduction of the initial payment, in particular the guarantee fund. The villagers were explained why the guarantee fund is needed for the success of the project. They were then asked to develop a habit of saving money, especially by joining Savings and Credit Cooperatives(SACCOs), by which they could slowly save for the required down payment for the SHS kit.

Finally, the first SHS kit was installed in the house belonging to the family of Mr Laurent Murindabigwi in Kamonyi village. The guests of honour cut a tape to symbolize the inauguration of the project.

Workshop on climate protection in Rwanda